The talk of the internet over the past few weeks has been all about the friendship break between YouTube beauty influencers James Charles and Tati Westbrook. Countless videos supporting each side have been surfacing the web, causing tension between the two and their fans.

James and Tati’s friendship goes all the way back to his pre-Covergirl days, when he was just starting out in the beauty industry, trying to make a name for himself and earn money through social media like Instagram and Youtube. Being 35 at the time, Tati was seen as more of a parent figure to help 17-year-old James with his business needs and protect him from the drama in the beauty world, as her husband (also named James) is highly successful in the business industry.

James Charles, while being relatively new to the beauty community, compared to other members, has definitely caught some backlash for basically anything he does, as expected from a 19- year-old millionaire. While his fans have had his back countless times when drama between other YouTubers and celebrities occurred, a lot of those dedicated fans have decided they’ve had enough after the new scandal with Tati Westbrook regarding hair vitamins.

Westbrook is known for her line of hair growth and strengthening vitamins, Halo Beauty. Of course, it’s hard getting into a business as unique as this, as customers usually don’t buy in bulk or don’t feel the need to spend money on a hair vitamin. Tati has repeatedly stressed to James her struggles of getting the product to sell, as her competitor SugarBear Hair is all over social media. Therefore, we can understand the feeling of betrayal when James produces an ad on his Instagram promoting the SugarBear hair vitamins. After the post, Tati took to her Instagram story in a video where she posted how hurt and confused she was that a person so close to her could promote her biggest competitor. Leaving out his name, fans were left wondering who Tati could be referring to.

After the story blew up, James tried reaching out to Tati to explain why he promoted SugarBear, saying he was in a “dangerous situation” at Coachella and they bought him tickets to get to a different area in return for promotion on his Instagram. However, Tati and literally no one else believes that. She took to Youtube and made the video that greatly contributes to the downfall of James Charles career.

The original video has since been taken off Tati’s YouTube channel, but recaps can be found with a simple Google search. 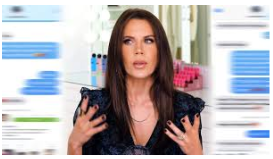 The video, titled “Bye Sister” has over 43 million views, and really focuses on Tati exposing James for his shady behavior within the past few weeks. While it may seem like a small incident, the build-up is actually what made Tati create the 43-minute long video destroying James. The video exposes him for trying to force his sexuality on people and being unloyal to his closest friends to get views, money or likes on social media. She explains that James never tried to contact her until a week after videos have been posted on Instagram and YouTube about the betrayal.  After the video was posted, fans of James Charles quickly changed their opinions of him and millions of comments slandering him and his career surfaced throughout the internet. James lost three million subscribers throughout the scandal, and most likely more as the tea continues.

James responded a few days later with his video titled, “Tati”, where he apologized for hurting her and her family by promoting her biggest competitor. However, he didn’t address any other major issues that Tati mentioned, like being vulgar and inappropriate in front of her family and trying to attract straight men only. The video seems like a pity cry for James, trying to get sympathy from fans who have already unsubscribed in a way to save his career. Fans weren’t impressed with the emotional apology and still continued to throw hate at the influencer.

As expected, some YouTubers close with Tati and James have decided to jump in and add to the drama. Jeffree Star, one of the biggest names on Youtube and a close friend of Tati and formerly James, took to Twitter to show support of Westbrook, saying Charles has not been allowed in the house since Tati’s birthday dinner in February where he kept being way too inappropriate towards the waitstaff.  He also goes to mention that James Charles is disgusting and sad in another tweet, adding fuel to the internet fire, saying that everything Tati said in her video was 100% true.

The feud just recently started to dwindle down, with James putting up yet another video titled “No More Lies”, where he addresses all allegations made against him. The post is stemmed from the massive amounts of hate he’s been receiving on social media for things he claims nobody has any idea about. However, the video seemed a bit sketchy as fans noticed some gray area in the details. For example, in Tati’s ‘Bye Sister’ video, she says James never tried to contact her or her family after the vitamin incident. In James’s video, he adds screenshots of text conversations where he was begging for Tati and James Westbrook to contact him back. Fans believe the screenshots are fake, which honestly is not beneath James Charles. The video didn’t do as much for James as he thought it would, thinking all his lost subscribers would magically forgive him because he made a long video just like Tati’s that got so much attention.

Tati and Jeffree Star both apologized to James, saying they’d like to have a meeting and move on from everything, but Charles says otherwise. He took to Twitter to thank the two for their apologies and states that he is on board to move on, but does not want to have any contact with either of the YouTubers. There has been no other recent drama that we know of yet, and it looks like everyone is just throwing the scandal under the rug to avoid any more unnecessary drama.