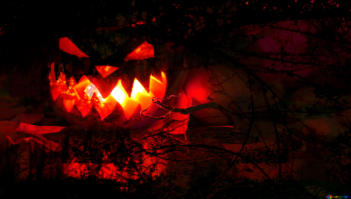 There’s nothing like the month of October to help get in the mood for some good horror movies. Just the thought of rolling up in a warm blanket on a cool night and watching some horror movies sounds awesome. So pop some popcorn in the microwave, turn the lights off and get comfortable because here are a few horror titles to check out during the Halloween season.

“Trick R’ Treat”: One great one to watch during October is “Trick R’ Treat.” “Trick R’ Treat”is a horror anthology that tells four different stories that all intertwine into one spooky plot. “Trick R’ Treat” explores the ideas of Halloween traditions and actually takes place on Halloween, making each story different, but intriguing. Although all the stories intertwine, they do have there own definitive story. One is about a teacher trying to teach kids about the rules of Halloween tradition. Another talks about four friends who are trying to help their other friend get a date for a party, along with a separate story about kids collecting pumpkins for some sort of ritual. The last story is about a cranky, old man who doesn’t like Halloween and realizes he is not alone in regards to what he thought was a night in. It is fun to find different parts of the stories overlapping into each other and keeps the viewer engaged and makes for an interesting format to follow. Overall, “Trick R’ Treat” is an underrated horror movie that deserves more recognition for the masterpiece that it is. Although not terrifying, it’s a fun watch with great practical effects. This movie cannot be streamed on anything at the moment, but can be bought at F.Y.E in the Crystal Mall, and for cheap too if there is a used copy. All movies on this list can be found there, if no where else, for a good price.

“Scream”: Surely, most people have seen “Scream” by now, but if not, it is a must watch. “Scream” tells the story of Sydney Prescott, a high school student, and her friends who become terrorized by the masked killer Ghost Face, who has already murdered two students at their school. As Sydney and her friends try  to stay alive, craziness ensues. While “Scream” is a slasher film and has suspenseful moments, it is also satirical in its self- awareness and dark comedy. This movie is also fun because trying to figure out who Ghost Face is helps engage the viewer into the plot. This movie is also good at character development and really allows the viewer to get invested in the characters. This is true especially with the strong female lead, Sydney Prescott. Fans of director Wes Craven will definitely love this film. This movie is currently streaming on Netflix and can also be bought or rented on Amazon.

“Candyman”: Another great movie for this candy-filled season is “Candyman.” “Candyman” is about Helen and her friend Anne-Marie trying to analyze the validity of urban legends. In their studies, they hear about the legend of Candyman where if someone says his name five times in the mirror, a man with a hook for a hand will appear and kill them. When Helen decides to put this legend to the test, and says Candyman’s name in the mirror, she realizes that her deep dive into urban legends might’ve gotten her into some deep trouble. This movie is fantastic because it has multiple layers and goes in a different direction than most would expect. The score in the movie is also very good and adds onto the sadness, suspense, and terror this movie is trying to convey. Although there are some jump scares, the horror does not rely on them to get a reaction. This movie also allows viewers to connect with Helen which makes it even more heart-wrenching when the climax of the movie plays out. Overall, this is another horror movie that deserves more recognition; also, with a possible reboot coming out, watching the original first is a fantastic idea. Sadly this movie isn’t on any streaming services, but if bought, it will not be a disappointment.

“The Descent”: For fans of gore, “The Descent” is definitely a winner. “The Descent” is about a girl named Sarah who goes on a spelunking trip with her friends in North Carolina. As the girls get deeper and deeper into the cave, they start to realize that animalistic humanoids are hunting them. With little information about the creatures, the girls try to fight their way out of the cave and survive. This movie is very good at making the viewer feel trapped, just like the girls in the movie, and will definitely bother anyone who suffers from claustrophobia. The weird creatures hunting the girls are also very grotesque and the dark atmosphere adds a lot of suspense. The end of the movie will leave viewers at the edge of their seats. This movie is a great overall and is definitely worth watching. This movie can be bought or rented on Amazon and is on Hulu, but only with a special Hulu plan.

So get ready to feel the horror of hearing a strange noise in the basement, and not knowing what it is, or the pain of getting soap in your eyes, because the thought of closing them in the shower is terrifying, along with the feeling that someone is watching from the corner of the room in the dark. Definitely check out these great movies this October.

Junior Trinidy Acevedo is a staff writer for the 2019-2020 Colonel. She has a strong love for anything horror and has a large collection of T-shirts. She also loves spending time with family and camping.