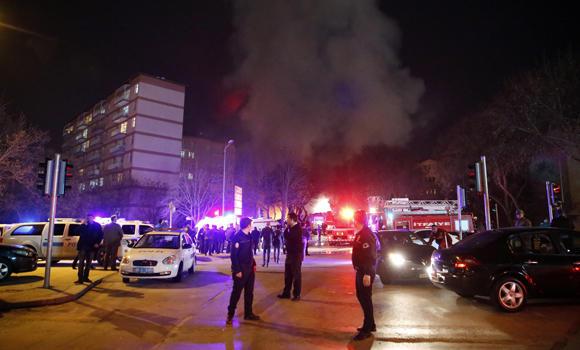 A car bomb planted near a bus stop in Turkey’s capital of Ankara blew up March 13, killing 34 and wounding 125 (Fox News).

This was the second attack in under a month in Turkey and it’s likely the left-wing militant group, Kurdistan Workers’ Party, is responsible for concealing bombs under parked cars (Reuters). The Kurdistan Workers’ Party was launched in the late 1970s with a goal of creating an “independent Kurdish state within Turkey” (BBC). Those wounded were immediately taken to nearby hospitals and onlookers were urged to stay back in case of a second bomb.

The blast was felt on the city’s main boulevard, Ataturk Bulvari, and even injured those on buses. Two days before the bombing, the U.S. Embassy warned Turkish citizens to avoid government buildings and Ankara due to a potentially high risk of a terrorist plot in those places (Fox News).

There seems to be at least one man and one woman responsible for carrying out the plan of planting a bomb reinforced with nails under a BMW (ABC News Australia).

Senior Leah Sheltry is the Assistant Editor-in-Chief of the 2015-2016 Colonel. She is the secretary of Youth United for Global Action and Awareness (YUGA) Club and is on the swim team. She will attend Lasell College to study Fashion Communication & Promotion next fall.