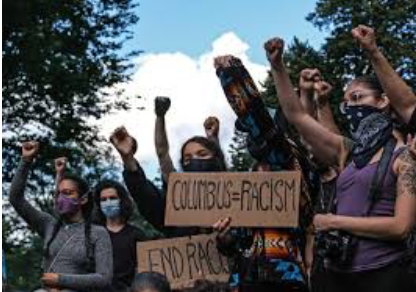 On Monday, October 12, many schools, colleges, and workplaces around the nation observed Columbus Day, a federal holiday initially designed to celebrate the discovery of America by European explorer Christopher Columbus. The holiday was first federally recognized in 1934, but in the years since then, 14 states and Washington D.C. have replaced the holiday with Indigenous People Day or Native American Day. Indigenous People Day, as it’s more widely called, is a holiday established to celebrate indigenous people and their cultures and to bring awareness to the fact that Christopher Columbus, while glorified in many schools’ curriculums as a hero, should not be celebrated as such.

Columbus Day was first celebrated in the late 1800s by those who wanted to honor Christopher Columbus’ “discovery” of the Americas. On October 12, 1492, Columbus, his crewmates, and his three ships landed in the Bahamas, instead of in India. They expected to take a journey to the west from Europe to China and India in order to trade for gold and spices. While the Bahamas are technically part of the Americas, Columbus was not the first explorer to land in the Americas, contrary to what is usually taught in elementary schools. The Vikings landed in Greenland and Newfoundland during the 10th century, which are part of North America as well. To avoid misconceptions like this being integrated into curriculums, Columbus Day should be replaced with Indigenous People Day for more critical reasons as well.

One of the largest problems with the continued celebration of Columbus Day is that many are taught that Columbus was a hero and that his discovery of the Americas changed history forever. European explorers were given the opportunity to travel across the ocean and begin colonizing the Western hemisphere. While it’s true that many of us wouldn’t be here today if it weren’t for Columbus’ journey, the Italian explorer is far from a hero. First of all, why is he credited with the discovery of the Americas if different Indigenous people and cultures had already been settled there for hundreds of years? This is demeaning to the Indigenous people, whose settlement in the Americas prior to Columbus is completely disregarded. According to USA Today, millions of Indigenous people had already established lives on the continent.

Columbus and the crew that arrived with him massacred the Indigenous people already living in the Americas. Columbus made not one, but four journeys to the Americas over two decades. He did as many other European explorers would do in the coming centuries: arrive to the lands of the Western Hemisphere and cause a genocide of the people who lived there. The Indigenous people of the Americas were enslaved, abused, and killed, through direct contact or diseases such as smallpox brought from Europe, by Columbus and subsequent European expeditions. Many cultures were lost to history as European cultures and religions were forced on the Indigenous people through colonialism, and there is no way to get them back. So when we celebrate Columbus Day, are we really celebrating a hero whose impact on the Americas and the Western Hemisphere is so amazing that it should never be forgotten? Or are we celebrating a racist man whose destructive actions brought an end to thousands of lives and cultures through enslavement, abuse, disease, and murder. When we ask this question, we are faced with another problem as well.

One of the biggest arguments for the continuation of Columbus Day’s celebration is that it gives Italian Americans the chance to celebrate their heritage after a long history of oppression, violence, and being framed as political radicals and criminals by many in the U.S. They have used the day as a way to celebrate their heritage and their contributions towards the Western civilization of the Americas. Italian Americans do deserve not only a day to celebrate their culture and recognize their historic oppression- in fact, they deserve every day of the year. But continuing to use Columbus Day as a symbol of recognizing those ideas is counterintuitive. Celebrating Columbus Day as a representation of Italian American heritage, contributions, and oppression perpetuates the failure to recognize the genocide that occurred when Columbus first came to the Americas and triggered a slew of European expeditions that would follow.

Indigenous People Day honors the Indigenous people of America present-day, and the Indigenous people who lived in America prior to and during westernization. It recognizes their struggles, how colonialism impacted and is still impacting their cultures, them as people, and it celebrates those cultures as well. Now, more than ever, it’s extremely important to recognize America’s history of systemic racism against minorities, in this case Columbus’ racist actions towards the Indigenous peoples of America, and take steps in order to make those racist actions known. We need to educate ourselves about how we can improve our attitudes and beliefs that stem from ancient history, and replacing Columbus Day with Indigenous People Day is one way to do that. Dictionary.com, among many other sources, recommends learning about the issue of Columbus Day itself, but also learning what English words come from Native American languages. All the same, we should continue learning about the oppression of immigrants from different ethnicities and countries as well. Instead of hailing Columbus as a hero from elementary school forward, curriculums should take steps to educate kids about those who settled in this country before Columbus’ arrival, all the immigrants who came to America, especially in the 1900s, from the assortment of different countries around the world, including Italy, and the oppression these immigrants faced. The book Stamped by Ibram X. Kendi and Jason Reynolds is “a timely, crucial, and empowering exploration of racism- and antiracism- in America,” and is a great read in order to provide yourself with background information on this important topic. In this, we’ll not only correct our mistakes in perpetuating systemic racism, but also provide information at an early age about the oppression different groups have faced in the past, and hopefully stop the same oppression from continuing in the future.

Junior Alex Martinez-Garcia is the co-editor of the 2020-2021 Colonel. When she’s not playing lacrosse or swimming for LHS or the Westerly YMCA, you can probably find her planning events as class president or in Outdoor Adventure Club. Outside of school, Alex loves to play the piano and watch every TV show that Netflix and HBO Max have to offer.

One thought on “The Problem with Celebrating Columbus Day”