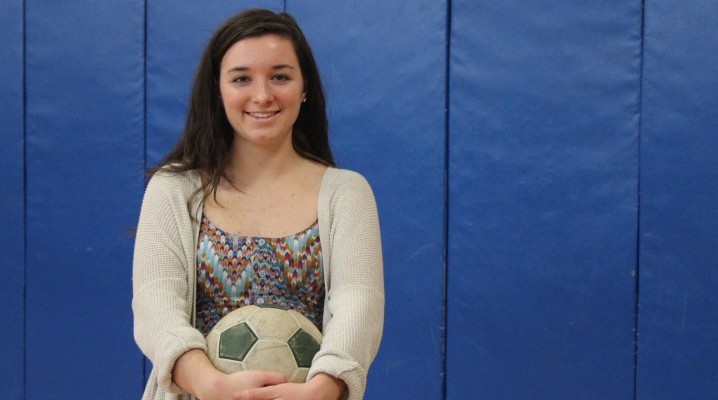 What’s your favorite part about soccer?

My favorite part about soccer is the competitive aspect. There is competition everywhere in the game. There’s the obvious competition between the two teams, but there’s also competition throughout the game in subtle ways. In order to advance in the field, you have to get past players on the other team. In order to get the ball, you have to compete with a nearby player for possession. My favorite, though, is probably the competition with yourself. You have to be willing to jump up to head the ball. You have to be willing to take that one extra step to ensure that the ball arrives at your teammate’s foot. You have be willing to do everything that you can to put the ball in the back of the net. Sure, it feels great to tackle a player, but the best feeling is when you accomplish something you didn’t think you could.

How have you developed as a captain since your junior year?

Last year it just sort of felt surreal to be a captain as a junior. I honestly was not expecting it at all. Being a captain among seniors, I had the feeling, whether or not it is a valid one, that my voice wasn’t that important. This year I came into the season with the captain title, and I was a senior. The mindset that I was already captain and the fact that I was leading people who were my age or younger, not older, really helped. This year I felt like I was more of a leader, not just someone with a captain’s band around her calf. I was more confident this year.

Where do you want to go in the future with the sport?

I am hoping to continue playing soccer at the club level in college. Hopefully soccer will be a part of my life for a long time.

What’s your favorite memory of soccer?

My sophomore year I only played one and a half regular season games because I sprained my ankle badly and was out for about six weeks. My favorite memory was recovering in time for our first round game in the state tournament play. I know I played terribly and was not in shape at all for 80 minutes of soccer, but the fact that I was out there on the field for the last game of the season was more than I could ask for.

For premier soccer, there is a tournament of sorts called the State Cup in which all the club teams in the state compete over the course of several weekends in hopes of winning the state cup. Three years ago, I sprained my ankle and was out for three weeks. The three weeks that I was out overlapped with the state cup tournament play. During one of the games, I was sitting on the bench while my team was playing. We were playing a very good club called Oakwood, and they had the better half of the game. My coach was not happy with my team’s performance and he turned to me at a point in the game and said, “We need you out there, Carly.” That is my greatest athletic achievement in my eyes.

How has soccer made who you are as a person today?

Because of soccer, I have been become a better leader than I would have been without the sport. I have captained both my club soccer team and the school team. I have also been invited to a couple leadership seminars because of it. It has taught me time management between school work and practices and games, among other things. With soccer, I have the pleasure of volunteering my time to share my love of soccer with kids in nearby towns through a series of camps that my coaches put on all year long. That has helped me discover my love of volunteering and the importance of it as well. I strongly believe if I didn’t play soccer, I would be a different person.

What sacrifices have you made for the sport? Do you think they were worth it?

I may have handed many hours over to the sport, and many of my weekends have fallen into the hands of tournaments, but they were all guided by doing something that I love. In that sense, I don’t consider them sacrifices.

Senior Sarah Schilke is Arts & Entertainment Editor for the 2014-2015 Colonel. She is the Girl’s Cross Country captain and participates in Youth Alive Bible Club.

2 thoughts on “Carly Loy: Athlete of the Month”