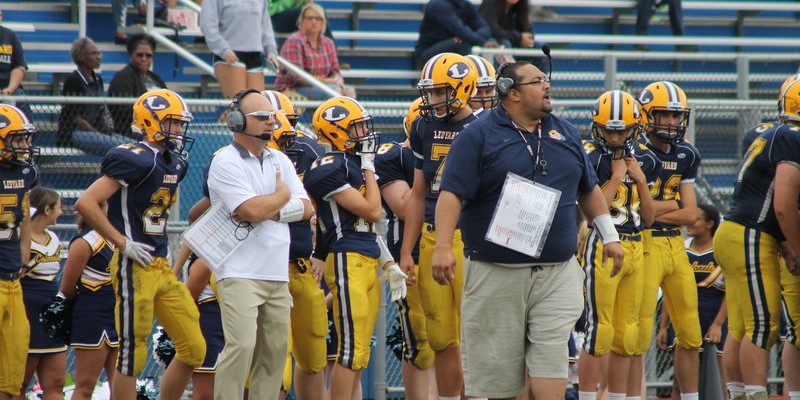 From the great coach Bill Mignault, down to coach Jim Buonocore, Ledyard football has always been successful. That is until recently. The Colonels have gone 2-8 for the past two seasons:   Something very unusual for the storied program. Could this have to do with the coaching changes? The Colonels are starting with their 4th new head coach in four years, which means the players have to learn a whole new playbook yet again. The class of 2019 takes on the hardest impact of these coaching changes. These players witnessed a state semi-final appearance and the winning ways of Jim Buonocore in their freshman year. Since then, they have had zero stability and no time to get comfortable within the program.

Coach Clay Killingsworth is here to change that. He wants to bring back the winning ways and is very aware of the old Ledyard traditions. When asked about the pressure of carrying on the “Ledyard Tradition”, Coach Killingsworth said, “…we want to carry on some of the tradition and build on the ones we already have.” Coach K has no intentions of forgetting the traditions at Ledyard.

Coach Clay mentioned playing against the Colonels “6-8 times in the past.”  He fully understands what this football team means to the community. “…It’s a job you respect, you respect the community.” When asked about why he decided to take the head coaching spot at LHS he replied, “…you get a chance to see the band going, they got a nice fan base, you see the traditions… in the back of your mind, you’re always like if that job opens you gotta take it; it’s one of the best jobs in the state.” Coach Clay has a lot of respect towards the program at LHS and high praise. He plans to carry this program into the future and bring back the respect from the ECC and the state to The Colonels. It’s must or bust for Coach Clay and the Colonels. Will Coach K be the next man up in the “Proud past, bright future” of Ledyard High School? He has a good chance.

Senior DeJohn Griffin is a staff writer for the 2018-2019 Colonel. He is an athlete on the LHS football and tennis teams. He is really funny and cute. He loves garlic parmesan chicken wings more any other food.