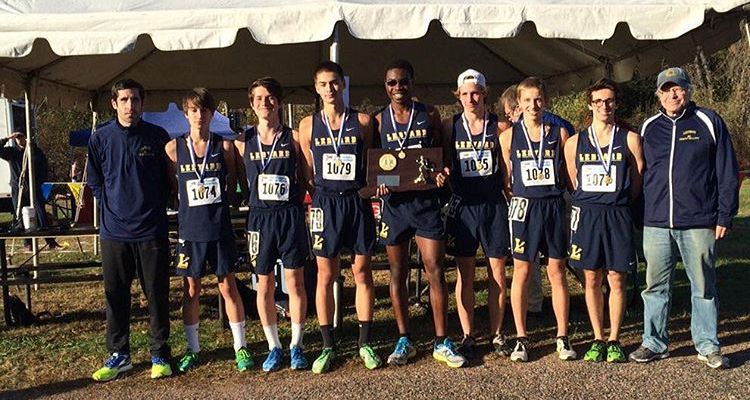 As the spikes are slid on and the faces of pure anxiety make their way towards the start line, the runners brace themselves for the pain that comes with running. The official raises the gun and announces that in ten seconds the race will begin. Then, with one last breath, the runners are off.

“Cross country is my favorite sport because the people on the team are some of the nicest people you will come across,” freshman Ben Vajdos said. “Even at the meets, the opposing teams are usually very friendly.” As the girls’ and boys’ cross country teams wind down their seasons, members from both teams realized the impact that cross country had on their lives.

“Cross country has definitely benefited my athleticism and always keeps me in shape,” senior captain Carina Mitchell said. “It has helped tremendously with lacrosse considering I am a midfielder, so I run a lot during games. Thanks to cross country, I have endurance I need in order to be a midfielder.”

Senior captain Destiny Kuss now sees the benefits of being a leader after her final season, “Being a captain is awesome and provides such a great experience. It helps me grow in areas that will be beneficial in my future, such as leading in the work field. As the season approached, my outlook didn’t really change. I believed that we had a good variety of skill this year and that we would use it to our advantage.”

The girls’ team ended their season with a ninth place finish in Class MM and many of the runners will return to running for the upcoming indoor track season. Freshman Cassidy Carroll, who competed in the state meet, said that she saw a difference in her training from the previous year. “High school cross country is way different than middle school cross country, you have to put in more effort and work harder in high school,” she said. “Middle school is not as serious and much easier.”

On the boys’ side,  Ledyard had a breakout year — winning the Class M State title and placing second as a team in the Eastern Connecticut Conference Championships. Despite their success, the runners still have a lot of goals.

“My future plans for cross country are to continue to train hard and really focus on doing more speed work, but also next year I will be playing baseball during the fall so I need to find a good way to balance out working hard for both sports,” sophomore Jacob Money said. On the other hand, senior captain Josh Snow was able to reflect on his career. “It doesn’t feel like I am a senior at all, it feels like I should still be an underclassmen  and that somehow four years have passed,” he said. “I would not change anything significant about my high school career, as the past four years have been pretty good.”

Both teams will have several returning key members next fall, but the boys will lose a front runner due to his move back to Washington at the end of his junior year. Captain Christian Kuss will compete for Ledyard for the rest of the year but his final season of cross country in Connecticut brought a new sense of leadership. “I felt as though I had almost a responsibility or duty to make an impact and do great things for the coach and myself,” he said.

Senior Megan Brawner is the Editor-in-Chief of the 2015-2016 Colonel. She is the captain of the cross country team and runs Indoor and Outdoor Track. She participates in Youth United for Global Action and Awareness (YUGA) Club and is the secretary of the Senior Class. She is the Editor of Key Club.