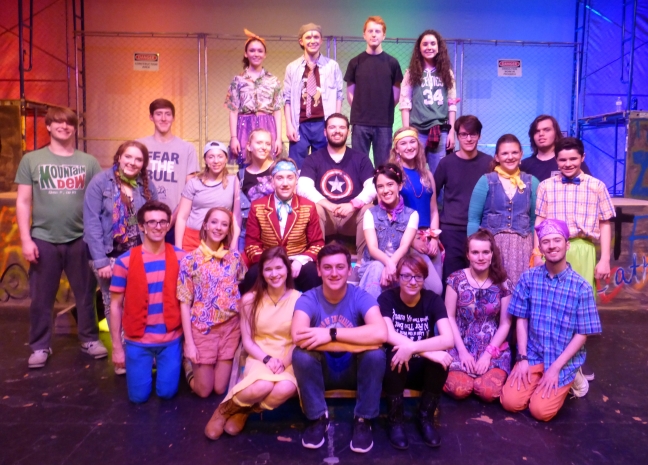 The city is known for never sleeping and now Ledyard’s Godspell cast will be too. The cast will be in New York this summer for the premiere of their musical and will be traveling across the United States for tours and live TV performances.

“It feels amazing. A dream come true for everyone in the cast. I can’t speak for anyone else, but I feel so honored to be given this amazing opportunity,” junior Carter Smith said. “Truly, it’s what I have been waiting for my whole life.”

With fame comes critiques and the cast of Colonels is prepared to face the wrath of good and bad publicity.

“I am pretty nervous for critics in New York. They can be pretty harsh. I take comfort in knowing that I’ll have my friends by my side through it, but I have confidence in this cast and this show,” Smith said.

“There’s always going to be harsh reviews, and some people won’t love the show, but you have to push through that,” senior Tricia Tolles said. “We put everything we have into our performances and that’s all we can ever do. I’m excited to see what a larger audience thinks of our interpretation of Godspell. It’s such a malleable show, so we really got the chance to make it our own.”

Since the Ledyard premiere in late March, the cast has had time to relax and reflect on their weeks of hard work, hard work that will pay off when they arrive in the Big Apple.

“We have worked so hard these past few months so the very fact that we will be performing on Broadway is a dream come true,” senior Morgan Wicken said. “ I am most excited about being back with this cast. It’s only been two weeks off of the performances at the high school and now that we get to travel together, we can all hang out again.”

For senior Andrea Gamboa, the experience will bring her new opportunities and long lasting memories, such as the ones she has engraved in her mind from former Ledyard productions.

“I’m excited to have connections and meet other Broadway actors; (and) hopefully get some of their numbers which will hopefully lead to a beautiful life full of song and dance and jazz squares (please don’t tell my boyfriend),” she said.

“I’ll always remember the friendships and the moments on stage that helped me become who I am today. I’ll also always remember the time I had to kiss Carter for a play because honestly that was traumatizing and will (sadly) live on in my mind forever.”

From standing on the Ledyard stage to post-premiere Johnny Rocket parties, the cast will be in good hands. The Ledyard community wishes them the best on this journey.
Senior Aaron Norcia is ready for fame and to represent Ledyard:  “I’m surprised it hasn’t happened sooner. (It’s) about time.”

Senior Megan Brawner is the Editor-in-Chief of the 2015-2016 Colonel. She is the captain of the cross country team and runs Indoor and Outdoor Track. She participates in Youth United for Global Action and Awareness (YUGA) Club and is the secretary of the Senior Class. She is the Editor of Key Club. She will attend Central Connecticut State University to study Business next fall.