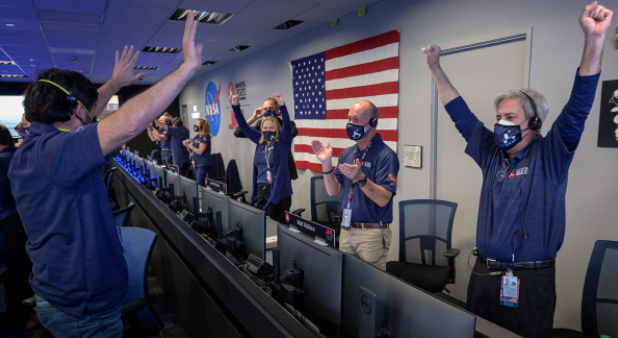 Since NASA’s Perseverance rover landed on Mars on February 18, it has been driving around searching for life. In this time, the rover has traveled to the south pole of Mars and is currently driving across the ice. So far about ten core samples of ice have been studied using the rover’s onboard instruments.

The rover’s suite of scanners and other instruments detected higher concentrations of carbon dioxide than normal in the lower part of the ice. Operators at NASA’s Jep Population Laboratory instructed the rover to use its longer but less durable deep-core drill to try to make it to the bottom of the solid CO2 ice. Perseverance spent hours drilling through the tough dry ice sheet to gather three core samples from an area, each about 100 meters away from the last in the shape of an equilateral triangle. One of these holes reached through a thin spot on the ice. When it was discovered that the trend of higher CO2 concentrations continued lower into the ice, the team at JPL used one of the many cameras equipped on the rover to look into the hole.

After leaving the camera in place for a full day, the scientists spent a week downloading the 4k images that comprised the video, which was recorded at 120 frames per second. While looking over the footage frame by frame one of the scientists noticed that occasionally there were dark spots that moved around in the camera’s field of view. Upon closer inspection, the team figured out what the dark spots were, the lower CO2 concentrations and the seemingly self-propelled dark spots could only have one explanation according to the scientists. They had found proof of life on Mars. The team published a statement on March 25 with basic information related to the discovery. A full paper is expected to be released tomorrow, April 2. Until then all that is known to the public is that there are small tadpole-like organisms living on Mars.

Video taken by the rover can be found here.

The NASA JPL website with the statement can be found here.

Freshman Sean Harren is a staff writer for the 2020-2021 Colonel. He plays soccer and lacrosse. In his free time, he enjoys sailing and CAD modeling/3D printing.