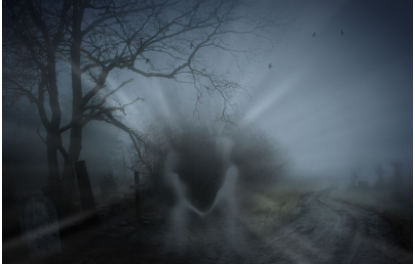 Throughout history, schools have been considered hot spots for spirits and paranormal activity and now, Ledyard High School is a part of the supernatural world. It seems unlikely, strange, some may say “Impossible! Not in little old Ledyard.” But recently, secrets have surfaced and students and staff have witnessed things that no one can forget. Back in November, one student (who has asked to remain anonymous) was walking down one of the stairwells of the 200s hallway when the lights began flickering. They assumed it was just an electrical issue and continued down the stairs but they were quickly stopped when the bottom doors slammed shut. Terrified, the student began to rush up to the top sets of doors and was able to make it out of the staircase. Instead of running back into class to tell everyone, they took a moment to breathe and walked back into class without saying a word, fearing that they would be made fun of and not believed. Multiple weeks passed and the student had not said a word to anyone, attempting to just push it to the back of their mind and forget it ever happened until one morning, in block one, they went to fill their water bottle during their study hall when they heard mumbling between two janitors. They paused, and continued to listen to the two janitors. The student claims to have overhear the following conversation:

“Remember when the field was getting re-done and they found a dozen skeletal remains underneath it?”

“Man, are you serious? Of course I remember. Who could forget? I can’t believe the school was able to keep that from getting out.”

“Well, they couldn’t. Apparently some students have found out and Amanda [Principal Fagan] has no idea how. I guess now a lot of crazy ghost *explicit* has started happening too. And let me tell you man, I don’t really believe in all of that but, I’ve seen some of it too. ”

The student then walked back to study hall. Ms. Fagan and Mr. Hartling have yet to make any public announcements to the town, but insiders have told us a few pieces of information. The school board has made some arrangements and plans to hire paranormal investigators to come to the school and perform an investigation. Also, this summer, Ledyard High School will be featured on an episode of “Buzzfeed Unsolved: Supernatural” with Ryan Bergara and Shane Madej. More is to come on this growing story.

Sophomore Evelyn Mallory is a staff writer for the 2020-2021 Colonel. In her free time, she enjoys listening to current joys, and painting.